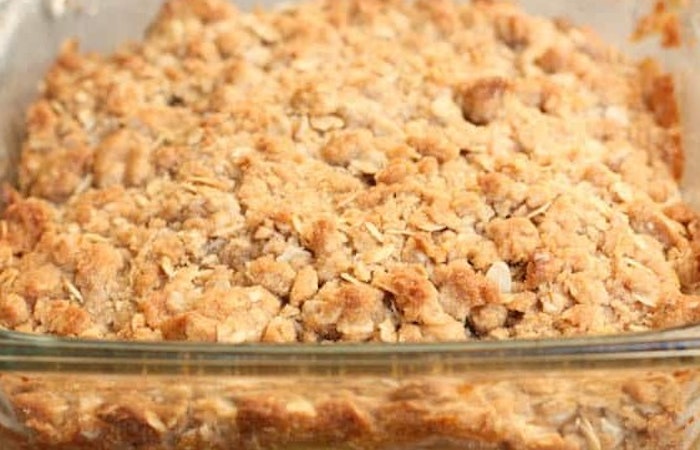 The BEST Apple Crisp recipe ever is made with thinly sliced Granny Smith apples and baked with a cinnamon glaze and oatmeal crumb topping.

Crockpot Apple Crisp: Place prepared Apple Filling in the bottom of the slow cooker. Add Crumble topping. Place a few paper towels on top of the Oat topping to absorb condensation, which keeps the Oat topping from getting soggy.

For the crumb topping:

For the Apple filling:

In a medium size bowl combine the crumb topping ingredients with a fork or pastry blender until it resembles small crumbs. Refrigerate while you prepare the apple filling.

For the Apple Filling:

Pour butter mixture over apples and toss to coat. Pour apple mixture into an 8x8-inch baking dish and spread into an even layer.

Bake for 30-35 minutes or until golden brown and top is set.

Remove from oven and allow to cool for at least 10 minutes before serving.

To make ahead of time:

Then Make the crumble topping and put it in a separate ziplock bag, in the fridge. When ready to bake, remove from the fridge, and sprinkle the topping on top. Bake as directed.

Prepare and bake the apple crisp as directed. Cool the crisp completely, then cover it with a double layer of aluminum foil. Freeze for up to 3 months. Thaw overnight in the refrigerator, then warm in a 350°F oven for 20-25 minutes or until heated through.


No reviews yet! Will you be the first?